650 West 57th Avenue – DP-2019-00686 – Dogwood Care Centre – Pearson Dogwood Parcel B
As the rezoning application for the Pearson Dogwood site was approved just months before Hannah and I began to document our city’s growth, we often learn a lot at these Urban Design Panel reviews. Though even someone who had closely followed this proposal over these 6 years would be surprised, as plans for the new 150 bed Dogwood Care Centre have been seriously altered. Not only has the height been cut back ~18 feet, but the layout has essentially been flipped (pg 2).

The driving reason for this is twofold, as the applicant hoped to improve the quality of these residents lives by orientating the internal residential area southward for better sunlight exposure. Which is important, as it’s unlikely the people in need of these elder care and trach beds will have an opportunity to mingle with the public in the plaza. Even the building’s outdoor amenity space has been broken into three separate areas to facilitate this diversity of needs.

That space highlights the primary reason for this reorganization, and ultimately why this proposal drew so much ire. Despite the applicant’s insistence that the building’s elevator core had to be moved to facilitate the turning radius of service and garbage vehicles, the panel remained unconvinced. The patio’s overlook of this service area seemed to outright disgust some, as they couldn’t stomach that the last moments with their loved ones could be disrupted by the servicing of a garbage bin.

Several trembled with emotion as they demanded this generation should be treated with far more respect and dignity, and recommended design development to the service ramp to facilitate this. The hope was that there was enough room to simply cover this area, but the city’s engineering department was instructed to find an alternative way to handle the building’s garbage if needed. Still, the majority believed the choice to abandon the adjacent plaza was the wrong one. 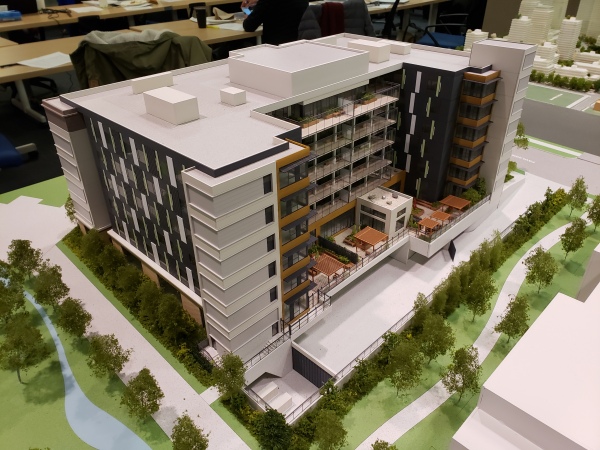 This decision was criticized as cutting out the community’s heart, and noted studies have shown seniors live happier lives when they can watch families, and their pets, play in public. They understood the area’s slopes presented challenges, as no one wanted to see a wheelchair roll down the street, but edible planting wasn’t enough to “cut it.” As such, they recommended more design development of the building’s ground level interface with the large plaza to the north.

It was hoped this would help achieve a better connection and relationship to the adjoining space. Ultimately, they recommended the very identity of the building needed further development to become the strong component the master plan envisioned. Even the building’s sacred space was described as little more than a tacked-on concrete block. This theme continued to the rest of the materials, which were felt to be a poor choice as they would reflect little light for those suffering from macular degeneration. 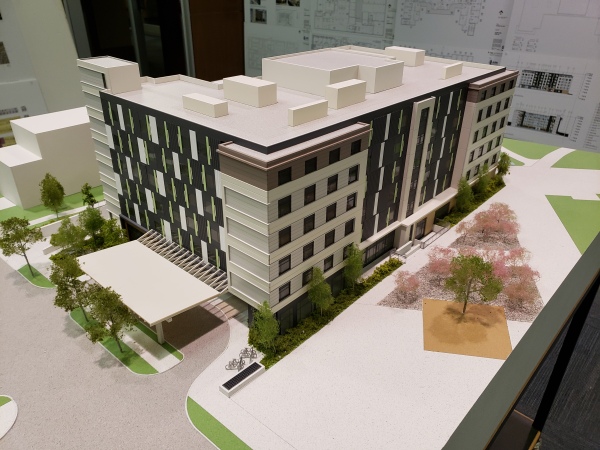 The final recommendation was to re-examine this cladding to maximize the comfort and livability of the users, and by this point it was clear the panel would not be supporting the proposal. The chair acknowledged there were concerns with all the questions city staff had raised, and put forward a motion calling for resubmission, which passed 5 -1. As one member summarized, the applicant had done an excellent job handling the programming, but it was now time for quality architecture.

This was easily one of the most emotional and critical meetings I’ve witnessed. That said, there was never any anger expressed, or doubt in the design team’s statement that they wanted to get this right too. The best way to ensure this happens is to send your thoughts to project facilitator, Jennifer Catarino, at jennifer.catarino@vancouver.ca or by phone at (604)-871-6023, before December 31st, 2019, assuming this project’s timeline isn’t delayed.