315 – 319 East 2nd Avenue – DP-2020-00305
It’s never a good sign when city staff begin an Urban Design Panel meeting by stating this review wouldn’t normally be needed. The issue isn’t that this project is half an inch over the 100 foot height limit permitted by the False Creek Flats Plan, or its range of uses which include micro rental homes, two floors of office space and even a brewery. Rather, this extra scrutiny was requested as it runs along the planned False Creek Arts Walk (Pg 66).

This concern comes about 25 years too late, as the city’s failure to secure necessary setbacks from a nearby strata building essentially halts this public space at the Vancouver Coastal Health Detox Centre. Still, the applicant claimed this steep lane has generated some opportunities, as they were able to incorporate double height, dual entry commercial spaces. The applicants thought their plan to create a mix of galleries, restaurants, and micro-breweries was enough to draw people in, but the panel disagreed.

They appreciated these planned services, and the Granville Island-like garage doors, were very interesting, but worried the blank wall at the lane’s entry failed to announce them. Some felt a mural would solve this, but the majority recommended wrapping the glazing from Scotia Street and the second retail unit into the lane instead. Yet all agreed the treatment of the Arts Walk left much to be desired, with members complaining about how it was broken up, shadowed, and the excess landscaping.

These various messages were compiled into a recommendation that suggested lowering the commercial space’s floor levels. After some refinement, the updated wording called for design development to further enhance functionality and usability of the lane. The applicants later explained they were consulting with the students from Emily Carr University on how to improve the Arts Walk experience, and these homes, but several panellists were clearly skeptical. One member simply couldn’t understand how creating affordable micro-homes would help these young aspiring artists. 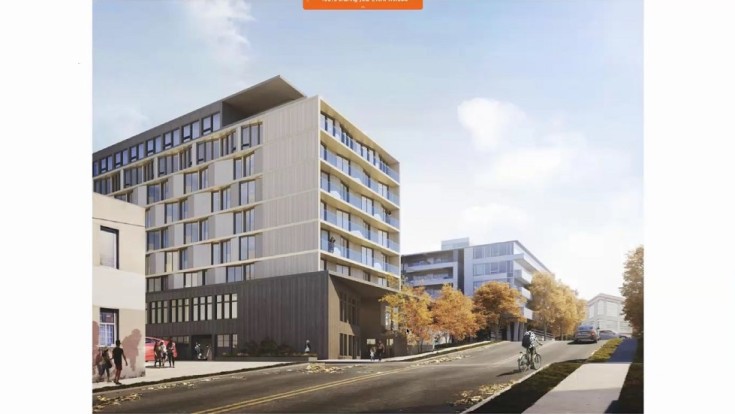 Despite a lengthy explanation from city staff and the applicants, they insisted it would have been better to provide artist studios instead. Others understood these smaller homes would be more affordable for a student’s budget, but did express concerns about the building’s overall livability on a hot summer’s day amidst this pandemic. To allow residents space for a breath of fresh air, they recommended enlarging the indoor and outdoor amenities, even if it required eliminating a couple of these homes.

As this site is located within a few minutes walk of two future SkyTrain stations, it may seem like these volunteers aren’t concerned with environmental sustainability, but that’s not the case. In fact, the recommendation to add extensive green roofs on the third, ninth, and top levels came as no surprise, as it’s become a typical request, even if it isn’t always feasible. That can make things a little boring, but the panel didn’t believe this design should be.

Though there was clear support for the project’s massing, height, density and materials, only a minority supported its restrained look. Most believed more design development was needed to enhance the mixed-use intent of the community guidelines. This was specifically meant to increase the quirkiness and distinct elements of the living, working, and commercial ground-floor uses. Further suggestions for design development of both the residential and office entryways, and to increase the prominence of the later, brought the total recommendations to seven.

One panellist worried these represented the “hot button items” of only a couple members, rather than the group’s opinion. Meanwhile, city staff cautioned the panel’s instructions needed to be specific, and that elements like the green roofs weren’t regulated by city policy. They stressed they weren’t trying to influence the panel, but needed specific instructions to take back to their boss. However this project’s fate was sealed when they admitted these recommendations were almost always implemented as conditions for approval.

Ultimately, as no one wanted to give up their personal pet peeves, a motion of re-submission was approved by an 8 – 4 vote. That number didn’t line up with my own count of 8 – 2, but make no mistake your thoughts are important, so express them to Project Coordinator, Katrina Hsieh, at either katrina.hsieh@vancouver.ca or (604)-829-9528. Given the degree of criticism expressed, Hannah and I assume you’ll have until August 31st, 2020 to speak up.

You can view more photos from this meeting here on our Instagram.