It’s not often that a project goes to the Urban Design Panel before it’s presented to the public at an open house. Then again, rental homes are rarely proposed in Shaughnessy, and this one might be the last for many years to come as the upcoming city-wide Secured Rental Housing Policy will forbid any others. In fact, the only reason this one can move forward is that it’s grandfathered under the closed AHCIRP.

That said, a similar application under the same program down the street from this one was just rejected by city council last year. Unsurprisingly, that decision appears to have created a real fear in city staff that our elected officials will once again find any reason to reject attempts to diversify this community. This applicant has paid the price for that, as they’ve been instructed to make several costly changes, including asking their northern neighbour to sell their home. 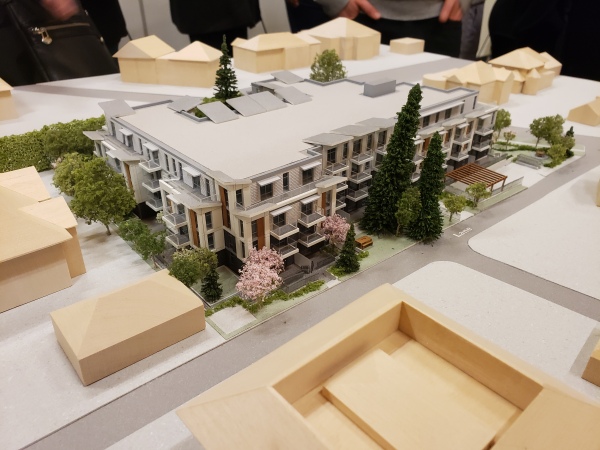 That arrangement was reached last year, back when that property was valued at $4.5 million. Yet a city bylaw will take a 15 foot wide strip on both sites to enable future road-widening on Granville Street. The design team was troubled this could eliminate the site’s two-storey tall hedge, as they were aware city council desired to keep this “green tunnel” intact. At worst, if it was removed they believed a sound dampening fence would mitigate the traffic noise.

The panel didn’t believe the additional 10-foot buffer would be able to resolve this, and worried the new trees here wouldn’t survive. The summary was that this area felt too fortified, but one member expressed it was better then the mish-mashed monotonous hedges that currently line this street. Nonetheless, the panel issued a consideration to address the response to the future public realm on Granville Street, and the impact it could have on the livability of these homes. 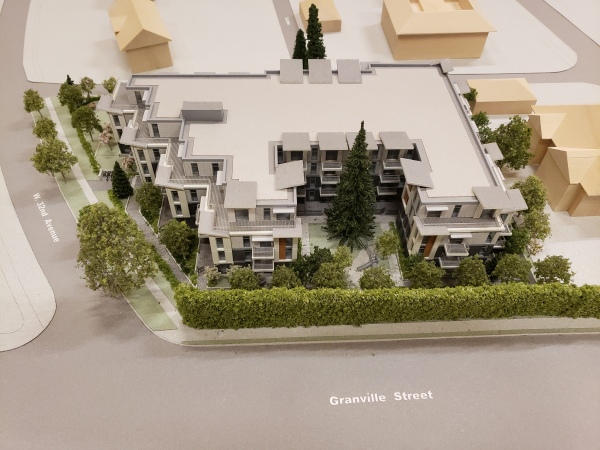 In contrast, the treatment of 32nd Avenue was well received, though there was a suggestion to move the lobby entrance closer to the arterial road. It was hoped this would make the meandering path around the property less publicly accessible to prevent CPTED problems. Others worried whether it was too narrow, and traversable by people of all age and abilities. While city staff expressed similar concerns about the functionality of the outdoor amenity space, the panel largely dismissed them.

However, several described the indoor amenity as little more than a leftover one-bedroom home that was too far from the outdoor amenity space. As such, they issued another instruction to reconsider its location, and to create a more positive connection between the two spaces. Generally, when it came to the exterior, the panel understood the applicant didn’t have a lot of freedom as the property presented a lot of challenges, and so did the policy that allows for this development. 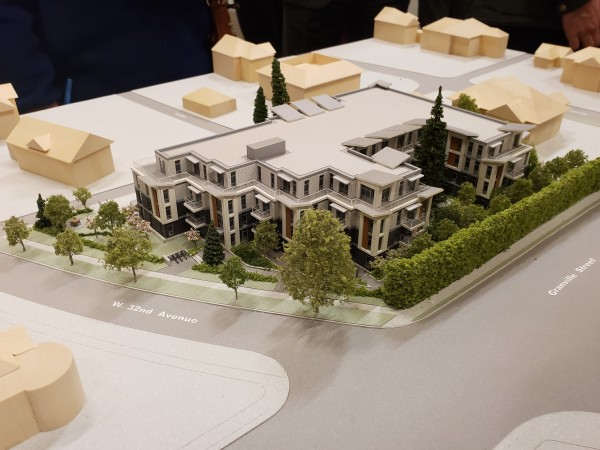 One member struggled with whether this form was appropriate, and most would have preferred to see a taller building that would allow for more usable common space. While the consensus appreciated that the design language was unique, instead of mimicking the Shaughnessy style, one element got under their skin. As such, the last consideration was for design development to the articulation and massing to mitigate the density, and to reconsider the “hat roofs” on top of the building.

I wasn’t familiar with term, but I later learned it it referenced the sloped roofs, and frankly, I’m not sure if that element will bother most people. The immediate neighbour to the south seems fine with it, as they’ve already expressed their approval for this proposal, and ultimately, the panel concurred as they voted 3 – 2 to support it too. Whether you think these voices have got it right, or that they missed something, make sure your thoughts are heard here.

You can view more photos from this meeting on our Instagram.