443 Seymour Street (601 West Pender Street)
This office building might be proposed along a laneway special to many K-pop fans, but Hannah tells me only about 40 people attended its open house, and the food there wasn’t anything remarkable either. Ironically, I didn’t attend that event as it was scheduled the same day as another Urban Design Panel meeting, but the concerns she heard weren’t about the loss of this 5 floor parking garage backdrop from a record breaking music video. Instead, they came from nearby homeowners.

These members of a nearby strata council were upset about the impacts on their home’s privacy and views. While city staff dutifully raised these comments, one panel member appeared to speak for the group when they dismissed them, stating that anyone who buys a condo downtown should expect close neighbours. In fact, the panel commended how this consistency of form and grid influenced datum lines (pg 2) created an appropriate scale that was both neighbourly and respectful to the adjacent heritage buildings.

However, there was an exception, as the panel suggested this structure’s relationship, setbacks, and neighbourliness to the Roger’s Building on the west side of levels four and five be reconsidered. The suggestions on how to accomplish this ranged from making the facade more opaque, pulling this gap down a floor, widening it a few feet, or eliminating this vestigial bay entirely. One member firmly believed if any job space was cutback it should be replaced with added height.

That request seems unlikely to be fulfilled, as several view cones have reduced the height allowed here from ~376 to ~338 feet above ground (pg 4). It’s also why the rooftop will serve as a bird habitat, with two floors of landscaped amenity space located below it (Pg 7 & 8), which some believed gave it a distinctive special touch. Others worried it diminished the crown, a key element in the building’s parti, and questioned where maintenance services, like the window washing equipment, would go. 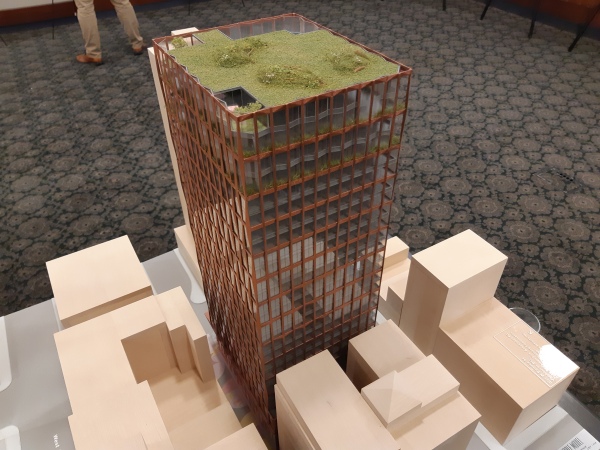 Perhaps they just felt this project deserved to shine, as it generated a lot of excitement in the room. The consensus was the form, colour palette, folded glass, and exoskeleton metal frame were well-handled. Combined with the heritage buildings on this block, they created a snapshot in time, which was described as beautiful and unique in Vancouver. Yet, the public realm drew relatively little attention, aside from some scattered praise for the chamfered entrance, landscaping, and the amount of seating.

That said, the final consideration called for design development of the canopies to reduce their solidity to create opportunities for more light on the ground and reduce conflict with trees. A desire to utilize pink pavers that would increase in intensity as they neared the lane also won support, but that will need permission from the Engineering Department. The developer certainly has reason to improve Alley-Oop as they also own the building with the basketball hoop on the north side.

This award winning laneway has seen its use triple since it opened as a public space in 2016, and the panel’s unanimous support shows they think this application will make it even better. Already over 400 million (video) have a connection here, with many who have come to visit and recreate their favourite music video. So whether this project makes your heart flutter, or you feel it needs to be looked Twice over, make sure to send your thoughts here.