128 East Cordova Street – DP-2019-00895 – Harbour Light
Normally I’m the only person, other than the panellists, who sits through the entire agenda of an Urban Design Panel review. This time was different, as for 5 hours I sat next to individuals from Corrections Canada, the Salvation Army, and the rest of this applicant team. Their hope was to learn how to prevent the panel requesting resubmission of these 254 shelter beds, 46 low-income homes, and a kitchen that will provide over 500,000 meals a year.

That may seem paranoid, but this application has faced several delays, including a lack of quorum at this panel and the Gastown Heritage Area Planning Committee (GHAPC). As the evening dragged on, I overheard the applicants worry they would once again be turned away. Yet when this project finally came up, city staff stressed the need to act quickly, acknowledging that an election could halt funding from senior levels of government that is flowing for the first time in decades.

That’s why this desperately needed building is proposed under the SHORT Program, which is designed to shorten the development permit process by nearly half to 12 weeks. Unfortunately, the only reason these non-market developments are viable is because they sit on some of the most difficult lands to redevelop, which results in a lower property value. In some cases this is due to a steep hill, other land is just oddly shaped, but in this case city policy is to blame.

As one panelist noted, city council could easily overhaul the Gastown’s HA2 District Schedule to allow the four floor height relaxation this team originally requested. After three meetings with the Director of Planning, and a visit to Belkin House at 555 Homer Street, only two extra floors were permitted. That concession was granted six months ago when it was highlighted the social housing portion of Westbank’s 33 West Cordova development exceed the area’s 75 foot height limit by 35 feet (pg 11).

The panel was clearly disturbed the full relaxation wasn’t given to this “noble” development. There was clear support for a consideration that called for more height to allow for a rooftop amenity, and the two extra floors that would enable another 46 homes here. No one wanted to see anyone left out in our cold weather, but there won’t be canopies here, as the Vancouver Police Department objected, fearing that people would sleep under them at night.

In an attempt to engineer a compromise, the planning department suggested using cloth canopies as they could be taken down at night, and would relate to the character of nearby Chinatown. The surrounding context weighed heavily on the panel, who worried the taller buildings envisioned for Hastings Street might ruin the livability of this building. For this reason, they issued two considerations, one calling for additional shadowing strategies, and the other advised improving the amount of daylight in the courtyard. 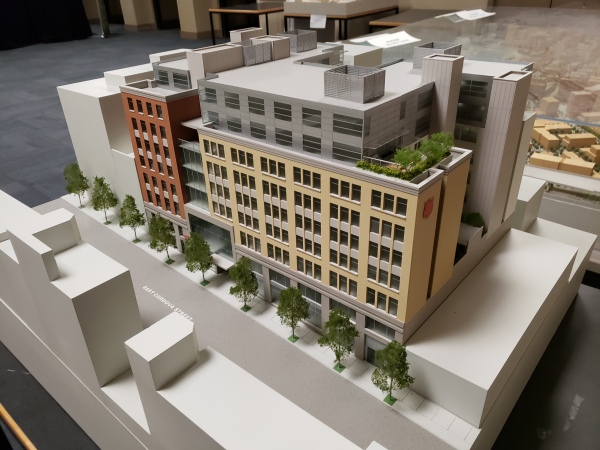 Issues around personal taste arose too, as some debated whether the building should incorporate one colour of brick or two. A couple also felt the materials in the laneway should be improved, but the majority understood these would ease graffiti removal. That said, all agreed with the consideration calling for the applicant to revisit the window mullions to favor a more vertical appearance. I’m not sure how these differ from recommendations, as there was only one of those.

This lone suggestion for further design development of the entrance glass frame’s interface with the building echoed the comments from GHAPC. It was felt a sign blade might achieve this, and lead to a better sense of wayfinding and identity. Though some wished the exterior highlighted indigenous culture, they were satisfied the interior would, and the project easily won unanimous support.

Still, neither the panel nor city staff have the ability to address all concerns raised at this meeting. However, as a member of the public, you have the power to influence these decisions. So make sure to send your thoughts on this application to project facilitator, Jonathan Borsa at jonathan.borsa@vancouver.ca or (604)-865-6021 before March 2, 2020 or by writing city council here to comment on the larger policy issues that were raised.