878-898 West Broadway
Though I would never claim to be an expert in planning or architecture, there’s occasions when I feel the time I’ve spent at the UDP has given me an insight into that world. As a result, sometimes I’m even able to correctly guess what the panel may recommend. Perhaps it was due to the way the chair of this meeting formulated the panel’s recommendations, but in this case, they caught me completely off guard.

Admittedly, I’ve liked this proposal since its pre-application open house, and though Hannah wasn’t at the city led open house, we both thought the design was beautiful and appropriate for its location on West Broadway near Vancouver General Hospital. 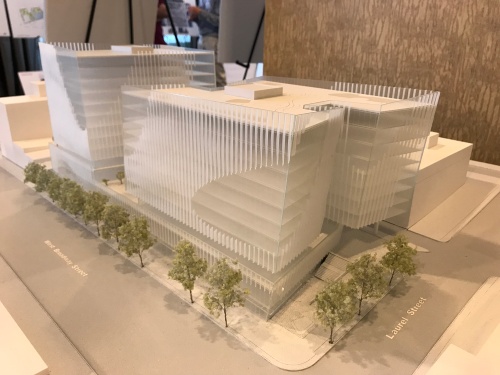 However, no one on the panel argued that this design was unattractive, or that the addition of more hotel space next to one of Canada’s largest hospitals wasn’t badly needed. After all, almost half of all patients at VGH come from outside Metro Vancouver. As one panellist noted, it’s very important that this hotel be set up to cater to the needs of its users, as they won’t be coming to Vancouver for a good time.

So, it shouldn’t be surprising that the primary focus of city staff and the UDP was about the livability of the hotel suites, and the quality of the courtyard space. That said, there were some isolated comments suggesting that the tower hosting the long term rooms should look different from the building with more traditional rooms.

Though there were concerns over whether each area would require a separate operator, the applicant team noted it was likely that any future operator would service both sections from a common lobby, but likely under two different brand names. However, the applicant team also revealed that, as negotiations were still ongoing with a couple potential operators, the programming had yet to be finalized. Even so, the building was being designed to suite the needs of these potential clients. 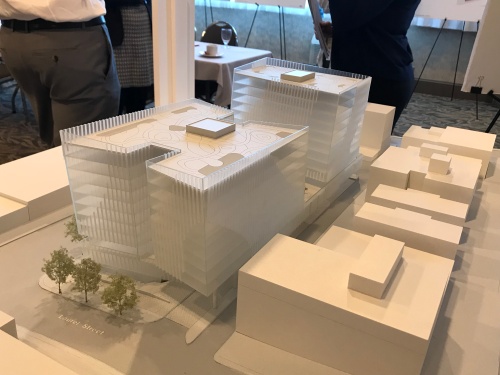 Still, the applicant team has been able to satisfy the needs of these potential operators. In addition, they’ve also accommodated a request from the city to incorporate a Mobi Station into an area that one panellist felt would have been better served as a public plaza. Though the recommendations were meant to reflect any comment raised more than once, it seems there were a couple individual suggestions mixed in as well, such as a panellist’s concern about sunlight penetration.

The majority also raised concerns about the quality of the public realm, and that major improvements are needed along Broadway, Laurel, and the laneway, as the building felt like it was too much of a good thing. It was also felt the eastern facade needed enhancement, and there were concerns expressed about the livability of suites in that section. While the height of the towers and street wall were said to be fine, only a minority of members felt the design was justified at this time. These voices also commended the concept of locating short and long term stays so close to the hospital, and felt the project would be welcomed in the neighbourhood.

Ultimately, the vote to support these recommendations was very close, 4 – 3 by my count. I’m not sure whether that means the panel was close to rejecting the proposal, or if it simply means that there was a strong minority opposed to the long list of proposed recommendations.

In the end, we feel the panel’s recommendations were a bit strong, but admit they raised a good point that, just because that block of West Broadway feels boring today, that doesn’t mean it can’t be made to feel more welcoming in the future. While I already submitted my comments at the open house, you still have time contribute by making your thoughts known here.

2 thoughts on “UDP Splits in a Narrow Vote – Are Badly Needed Hotel Rooms Justified or Too Much of A Good Thing?”