With the hot summer weather, where else would Darren and I head on a beautiful Saturday than to a Town Hall meeting at the unairconditioned Pacific Spirit Church. This event was hosted by Vancouver Quadra’s MP Joyce Murray, who was joined by Vancouver’s Chief Engineer, UBC’s Associate Vice-President of Campus and Community Planning, as well as representatives from Translink and the West Broadway BIA. 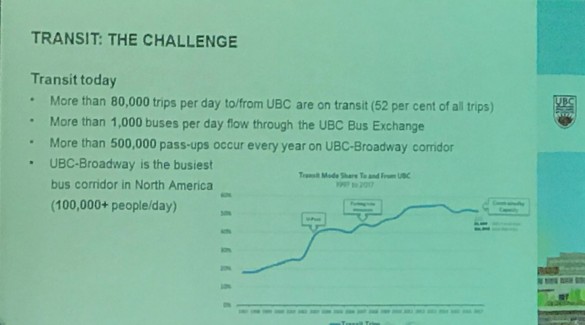 The very hot room was filled with about 100 members of the public, including council hopeful Catherine Evans, members of the The University Neighbourhoods Association, the West Point Grey Residents Association, and even a high level representative from Hong Kong’s diplomatic mission. The event was also live-streamed on Facebook, which may have reached a younger demographic than the roughly 100 people who attended the event.

The meeting began as the table laid out a vision for the future and why it was felt grade separated Skytrain was the best choice. The representative from UBC highlighted that the campus hosts at least 24,000 people at night, and has a daytime population nearing the size of Kamloops. This large population is extremely reliant on transit, with over 1,000 buses a day passing through the bus exchange. With a total of 80,000 trips a day, it is also the busiest bus corridor in North America. Naturally, as UBC’s population is expected to double within 20 years, the university not only supports the Skytrain expansion, but desires two stations. One would be located at the University Boulevard bus depot where underground systems have already been moved in preparation, and another in the rapidly growing Westbrook Village.

Next was the representative from Translink, who had family that recently graduated from UBC. They explained that Vancouver is experiencing the fastest transit growth in North America, and that even with buses arriving every 3 minutes on the corridor, over half a million people are still passed up every year. While surface LRT may be able to handle the 100 thousand people who use the corridor today, even city block length trains couldn’t handle future demand, which is expected to grow to over 140 thousand people by 2025. That increase would easily handled by a Skytrain line that would increase capacity by 255% and cut commute times in half. Going forward, Translink also plans to make better use of their stations, incorporating them into affordable housing or office space instead of being left to stand alone. 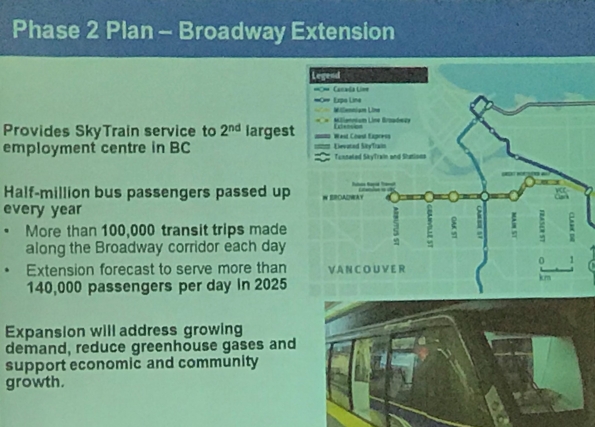 Similarly, the next speaker, Vancouver’s Chief Engineer, admitted that lessons have been learned from the Cambie Corridor and that an area plan to bring both high and soft density will be part of the planning process.
When asked by a former London resident whether similarly challenging soil conditions could prevent construction, the response was that to an engineer that’s just viewed as a challenge, and if it could be done under False Creek this area shouldn’t be a problem. 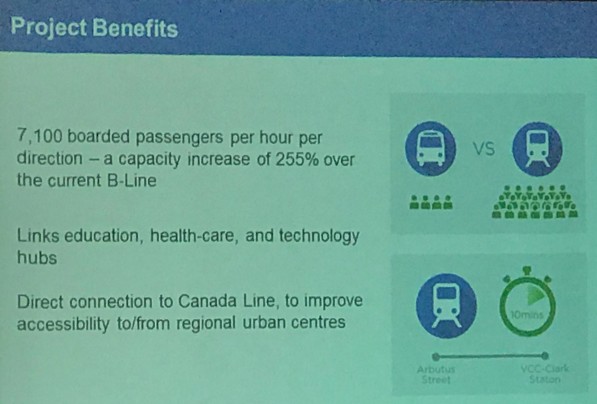 Others hoped the expansion wouldn’t happen, as they preferred to wait for an experimental technology like Elon Musk’s Hyperloop, or similar systems (which would prevent any stations between Arbutus and the terminus at UBC).

Similarly, a frequent Vancouver Sun Columnist expressed they didn’t have a question, but wanted to make a statement that they didn’t want to see money spent on this line, and would prefer a street car grid throughout the city. They felt foreign students and expensive arterial developments were the greatest problems, and believed that the expansion would result in everything from 16th to the water, and from the University to wherever this thing goes being rezoned for higher density. They thought there was better places to focus transit spending other than this “corridor to nowhere.” 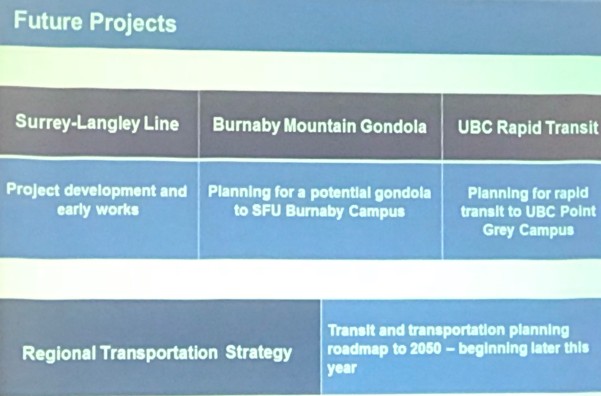 In response, the board explained they had considered over 200 alternative options, and that a city-wide street car system would not solve the capacity issues affecting Broadway and the University. They further noted that Vancouver’s trolly bus system actually handles 10 times more passengers than Portland’s urban LRT Lines.

Conversely, one West Point Grey resident expressed their irritation that more development/housing may be needed to generate the fees to pay for this line. They explained they, and their neighbours, were irritated, as it’s not like they would use this line anyways. Though they acknowledged the need for transit service to bring in customers to the stores, they felt like they were the only ones adversely affected by the diesel buses, and wanted a better, slower option instead. They were clearly frustrated, as they believed they lived in a small community, and that transit was dividing it up like highways. 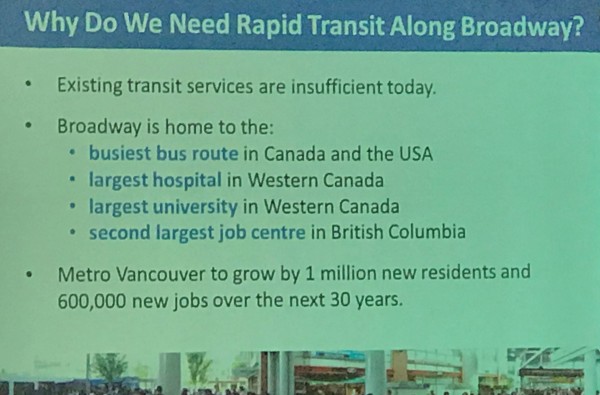 The meeting closed with a small debate on the panel on whether there was time to combine this extension with the one going to Arbutus. Some members expressed optimism if funding was in place, it was still possible. The opposing view was that, even if all the stars aligned, the time required for the procurement process was too long. As a result, it’s likely that the staging area for a future UBC extension will be on university grounds to avoid dump trucks full of dirt being stuck in the centre of the city. If an expansion was to happen anytime soon, both sides agreed that it would require the public to strongly advocate both senior levels of government and the region’s Mayors Council. So, if you’re sick of watching crowded 99 B lines pass you by, make sure to write your local MP, MLA, Translink, and local civic government and demand they fund a proper connection to UBC.

You can watch the recording of the event here (Part 1, Part 2).