1261 Hornby
It has been almost a decade since it was first proposed there was a better way to use the land near the foot of the Burrard Bridge instead of it being wasted as the home of two car dealerships. This led to a process with plenty of community engagement over several years that concluded with the approval of 3 towers in 2013. Tower A will be the tallest all residential building in Vancouver; Tower B is a sleek office building, and will be the new home of the previously mentioned car dealerships; Last is Tower C, a second residential building that will be linked to Tower A by a podium full of office space. 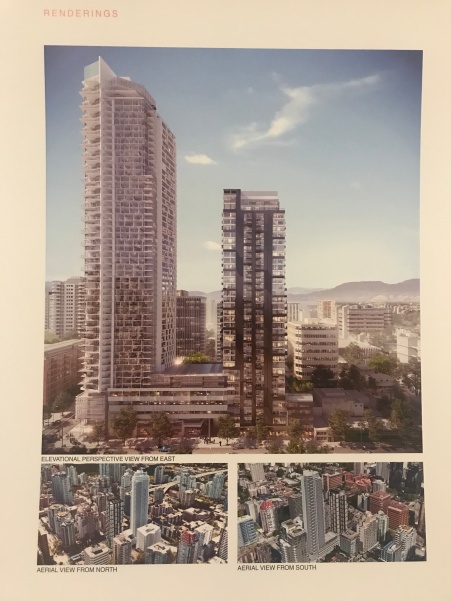 Since then, it has been relatively slow going, Tower A is only a few floors above the surface, whereas Tower B still hasn’t even poured its foundation. Meanwhile, Tower C has lagged even further behind, and is only now making its way to the development permit board. Clearly this delay has only resulted in a better design. Both of us are happy with the building’s design, as its darker tones and pop-out “window modules” really set it apart from the neighbouring buildings, especially its taller sibling, which looks rather plain by comparison.

That said, we are torn whether this design would look as attractive if it was stretched to a similar height. Though the rooftop of Tower A was sculpted as a requirement of city policies, this building’s rooftop alterations were done to improve the relationship between the two buildings. Still, it is the treatment of the lower portion that concerns us, as we feel the design of the Tower C fails to connect with the podium of Tower A. We think it would be better for the white and black shades to be blended together, which could act as a better transition. However, this is personal taste, and Darren often hears UDP recommend applicants to continue a tower’s language straight to the ground.

Though we’re not exactly sure what will be at the ground level, as while we heard discussions a grocery store is planned, other members of the applicant team seemed to cast doubt on that idea. That said, residents won’t need to go to the ground level to enjoy the ample amenities in Tower A, as there will be access to that building via a bridge over the lane. That said, the outdoor amenity space in Tower C looks fantastic, with several fire pits, communal tables, a couple BBQ’s, and plenty of green space, including a green roof on the top of the tower. Though there will be a children’s play area in Tower A, we strongly feel there should be a play space here as well, or at least something to keep kids busy while their parents are cooking.

I’m sure members of the city staff and applicant team at the open house would have loved some activity, as only about 10 people showed up to the event. That is sort of a shame, as even though the general form, height, and amount of office space, strata, and non market housing is already approved, there is still an opportunity to weigh in on the design and function of the building to ensure it is the best it can be. So don’t be shy, make your opinions known by contacting project facilitator, Carl Stanford, at carl.stanford@vancouver.ca or at 604-871-6796