524 – 526 Granville Street
This is something Darren and I don’t see very often. Not only does it show what appears to be a significant addition to a 108 year old heritage building on Granville Street, it also looks like it may still be in the early stages of design. While no rezoning or development application has been submitted, and, as far as we know, there hasn’t been a pre-application open house, together we have managed to figure out some details about this project.

First and foremost is that the architects are Perkins and Wills. We reached out to their offices for more information, but never received a response to our email. As an official application has yet to be made, we’re not surprised by this, and we understand their silence on the matter. While the writing on the road makes it easy to see this is on Granville Street, Darren had to spend a short amount of time on Google Streetview just to confirm the building is where we thought it was. 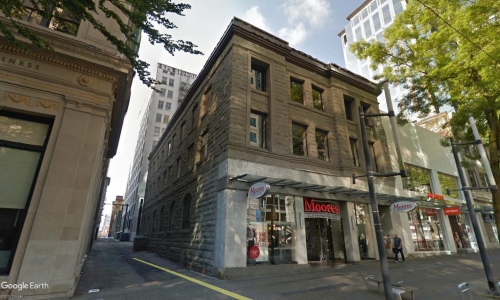 Based on the similarities between the model and the existing Moores Suites building, as well as the heights of the neighbouring towers at Pacific Centre, we’re pretty confident this project will be one of Vancouver’s newest heritage revitalizations. The model seems to show that the exterior of the heritage building will be retained, though we doubt the interior will be. Based on a recent visit to the store, it appears the only elements that would be lost are actually faux heritage, apart from the third floor storage room ghost.

We are pretty confident this building will be for office use, as that is what the Central Business District Policies permit. As the existing buildings on the block are roughly 17 floors tall, we can assume this project will meet that height. However, with the shortage of office space in the region, we wouldn’t be surprised if it was actually a bit taller than its neighbours. 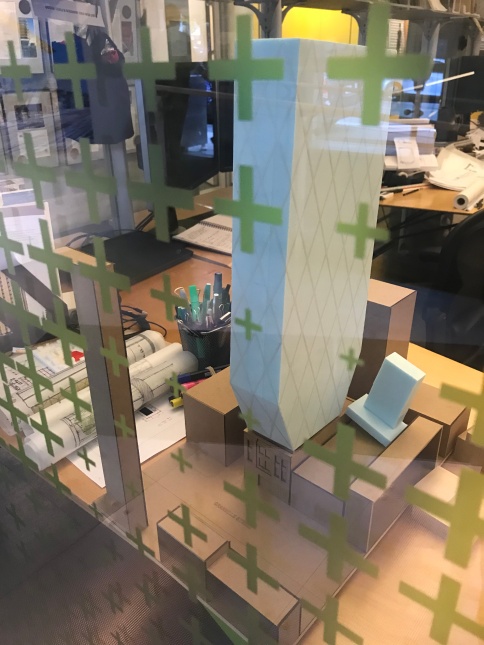 Of course, this model could be an academic or practice concept, we simply don’t know. Unfortunately, this means there is no one to contact with your thought about this proposal, so we’ll have to wait and see what materializes here in the future.

3 thoughts on “Dressing up Granville Street’s Office District – A Model of Things to Come?”