It’s no secret that False Creek South was once the pinnacle of urban planning in Vancouver, and is still one of the most affordable places to live, when there are openings. This affordability is due to the majority of the land being owned by the city, which has resulted in co-ops, social housing, and long term leaseholds. However, those leases are nearing the end of their term. While negotiations have been taking place on how to resolve that matter, there have also been a series of events to respond to the changing needs of the community and the city. The purpose of this open house was to present the guidelines, which were drafted by 350 members of the community over six workshops. 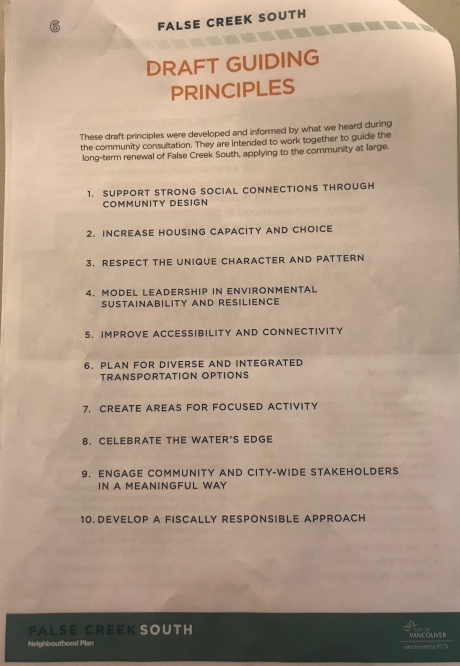 The event took place at the False Creek Housing Co-op by Sitka Square, which highlighted two problems in the neighbourhood. One is the lack of activated community spaces– while more retail was planned here, it ultimately failed due to a lack of density. The other is that the area is very car reliant, leading the Metro Core with the highest percentage of trips to work made by car. Sikta Square embodies this, as it feels less like a public space and more like a parking lot. By the end of the event, 180 people had dropped in, though I missed the early rush as I arrived just after 4pm. Still, I did see a fair number of people who appeared to fall into 2 groups. The first were those curious about the guidelines, who would look at the boards, and then leave. Though some did stay to catch up with their neighbours, which shows how close knit this community is. The second group were people that were clearly upset. Their anger was not about the guidelines, but rather about the seawall closures and/or the location the city has proposed for a public toilet.

I think the biggest concern at the workshops was a fear that people would be made homeless when their leases expired. Perhaps it’s due to the engagement between the community group, Replan, and the city, but I didn’t hear that fear expressed at this open house. The neighbourhood is rich with architects and former city planners, and maybe that has helped the understanding that the neighbourhood needs to change to reflect today’s needs and the area’s aging population. It seems people are open to seeing more density along the neighbourhood’s outer edge, especially in the parking lot by the Canada Line Station. There has been one really clear demand throughout the process, and that is a desire to see the former Olympic Streetcar service running as soon as possible. There’s more events to come for this neighbourhood, with an upcoming series of design workshops, and a still to be formed Community Advisory Group. In the meantime, one can find more about the guidelines, the results of the workshops, and by make sure to weigh in.